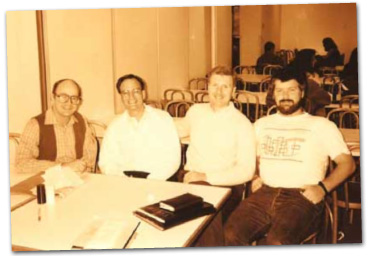 In 1989, Barna Research Group was hired to conduct a national study on the needs and struggles of graduate students. The results were stunning: grads were found to be leaders, focused, and high-achievers. However, they were also found to be isolated, stressed and skeptical about the relevance of spiritual issues in life. They had little balance in life but they were thought-driven individuals who valued relationships and intellectual discussions. In response to the study, one graduate student remarked, “I thought I was alone in my struggle but now I see that most grads are hurting like me.”

As a result of this study, Grad Resources was constituted as a faith-based service organization to serve the needs of graduate students.

In response to a Grad Resources article addressing student-advisor relations, one graduate dean revealed the harsh reality concerning graduate students. “Many professors view their grad students like the desks they are issued at the beginning of each year… to be used for research until they are used up.”

The harsh reality of life as a graduate student was given a name and face in 1998 when Jason Altom, a 27-year old doctoral student from Harvard took his own life. Nick Repak recalls hearing the news. “I began asking myself, ‘What drives a successful graduate student with a promising future to such a desperate point, to believe there is no way out, and nothing to live for?'”

In response to Jason Altom’s tragic story, Grad Resources set out to address the extreme points of despair many graduate students find themselves in, leading the organization to launch the National Grad Crisis Line in 1999 in addition to its online articles and services. Today, the Crisis Line receives hundreds of calls every month. Graduate student organizations promote the resource on campuses across the nation. Likewise, mental health offices and graduate student services continue to make their students aware of the Crisis Line to their student bodies.

As a supplement to the on-campus mental health resources, the National Grad Crisis Line is promoted by graduate student services during orientation, at holidays when university facilities are closed and the first week of April, during National Graduate and Professional Student Appreciation Week. The Crisis Line is another voice of support for students reminding them they are not alone in their struggle.

Being a Faith-Based Organization

From its inception, Grad Resources has operated as a faith-based organization with the conviction that spiritual health is significant to an individual’s overall well-being. As such, Grad Resources has and continues to offer its services free of charge to any individual, regardless of his or her religious affiliation. Since 1998, the organization began developing and expanding local community groups, where graduate students could safely discuss the role of faith in their academic pursuits.

Today, Grad Resources is active and thriving, expanding our tools to address the struggles of graduate students and providing supportive faith-based communities. The National Grad Crisis Line continues to receive calls every month from graduate students looking for emotional support. Our advice and counsel continue to be requested by dean’s offices and press outlets while students readily consult our online resources. The Christian Grads Fellowship, where students wrestle with the role of faith in their lives, is now active and developing on campuses throughout the United States, Europe, and Asia.